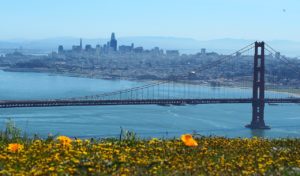 San Francisco is the most liberal city in America. You can do what you like, say what you like and act the way you like without other people caring. Regardless of what you prefer, you will still enjoy yourself in the city.

People visiting San Francisco for the first time will not fail to notice that the residents love partying. They will be met by a culinary scene that leads the city which makes them feel that they have visited the most beautiful city in America. Besides the beauty, the attention of visitors will be grabbed by the people influenced by the idea of the American melting pot. There are many things one would be interested in doing when visiting the city. They include shopping in the city’s downtown boutiques, riding cable cars, sailing and exploring the neighborhoods. The city population is about 840,000 people with about 18 million visitors each year. The best time to visit San Francisco is between April and May or September to October.

The number one tourist site in San Francisco is the Fisherman’s Wharf. Visitors can explore the sea lions, Musee Mecanique’s arcade games and marvel at the tall ships at St Pier. A tour at the Maritime Historic Park and a ride on the modern ferry to Alcatraz are among the things to explore.

The most spectacular spot in the city is the Golden Gate Bridge. It is 80 stories high above the Golden Gate waters which are a narrow passageway between the bay and the ocean. The best time to visit is early afternoon or midday when the sky is clear. this allows you to view the Pacific and the downtown skyline.

They are moving National Historic landmarks in the city. Powell St lines are very popular with tourists, therefore, it is best to board early in the morning to get some space. The alternative would be to board the less popular California St line but that means you will miss some incredible sight-seeing. The Cable car museum provides rich information on how the massive network functions.

The landmark ferry building has been transformed into a huge market with artisanal foods specifically from local producers. Midday is the best time to visit as all stalls are open and local workers will be having lunch. From there, you can head to the Exploratorium, the science museum. In the evening, ensure you head back to the Bay Bridge. You will marvel at the spectacle of 25,000 LED lights that create very unique patterns. Actually, the bridge becomes the largest LED display in the world. Other places to explore include Lombard Street, Russian Hill, Golden Gate Park, Chinatown, and Union Square. You can check a full guide to San Francisco City, California by Wikipedia one of the most authentic sources of information online.